The idea for this came from my cousin who sent me a picture from his Mensa calendar: 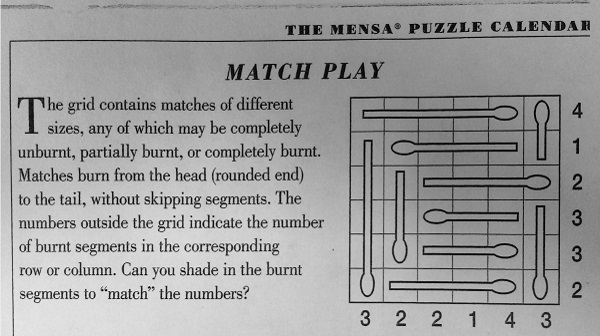 I wouldn't say I was nerd sniped, but the puzzle was intriguing enough that I wanted to do more of them. There were a few similar offerings in the iOS/Play Store involving thermometers, but I wanted to try to build one with more intuitive controls as well as more variety in the puzzles (curved matches). My cousin agreed, so we built this game over the course of a year or two together.

The name "Embergram" comes from avoiding the word "match" at all costs because... well, try searching the app store for "match puzzles" and you'll find the results saturated with puzzles having to do with matches, but not of this variety. The scope of this game was originally much grander with a storyline and so on, but development was stagnating so I just wanted to get a minimum viable product published.

Lastly, this game was originally released for iOS as well since it was built with Unity. However, it costs $100/year in Apple developer fees to keep the app in the store. The game is free and only generates revenue via opt-in advertisements, so when it became clear the iOS revenue generated wasn't even going to cover the Apple developer fees, I let it lapse. If you are reading this and you really want it available for iOS, send $100 my way and I'll reinstate it ;)